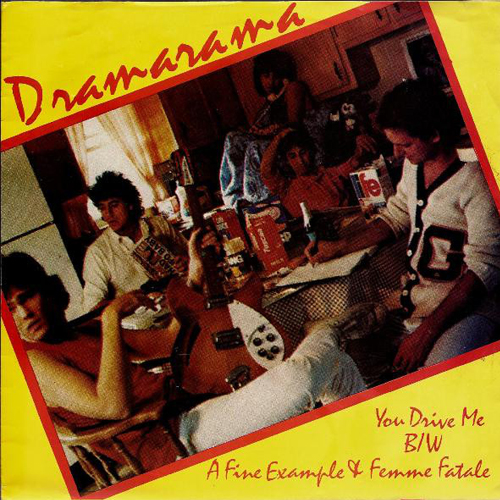 John Easdale: We put out a 45 that had “A Fine Example”, “Femme Fatale”, and a song called “You Drive Me”. That came out the same year they sold the record store, so around ’82, but it probably actually came out the beginning of ’83. We made the 7″ ourselves. We went down to the factory ourselves and put it out.

Mark Englert: There was one moment where we were trying to conceptualize the 45 cover, and it involved a record pressing plant out on Long Island. I had to go out there, but a big horrific snowstorm was coming through, and I ended up sleeping on the Cross Bronx Expressway that night. I was driving a 1973 Ford Maverick, which had been leaking gas, and I basically got there on next to nothing and then got stuck because the bridge had shut down.

John Easdale: I don’t think the 45 was big anywhere outside of our families’ houses. But we were lucky enough to get a review in the Trouser Press magazine, and there was a DJ in France, Jose Ruiz, who contacted us because he read the review and he was playing us on his radio show in France. We then went into the studio to record what basically turned out to be the first half of Cinéma Vérité, a 12″ called Comedy.